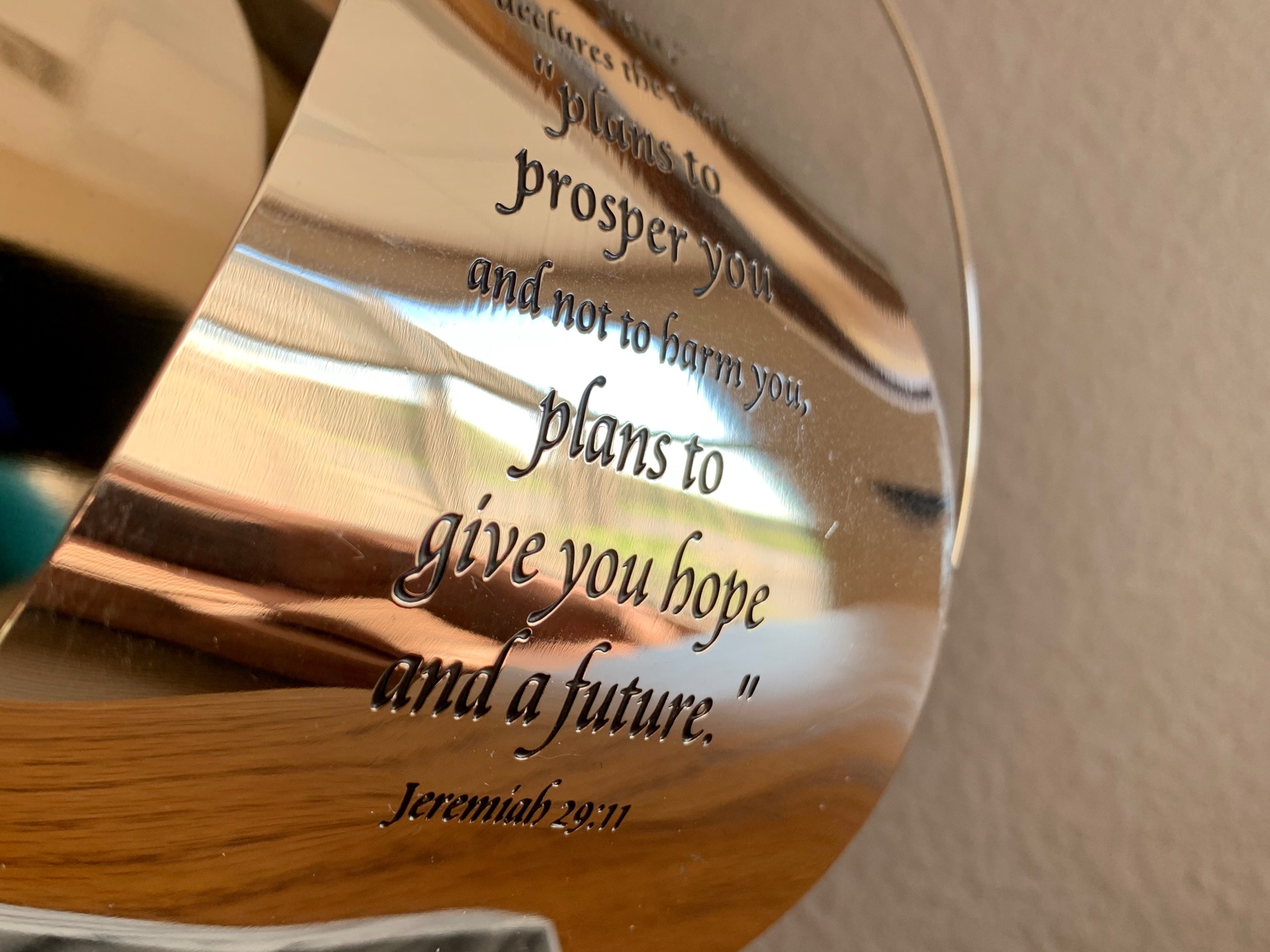 “For I know the plans I have for you, declares the LORD, plans for welfare and not for evil, to give you a future and a hope” (Jeremiah 29:11 ESV). This verse is among the most oft-quoted in Scripture. It’s comforting to think that God already knows the good plans He has for our lives.

The picture above is of a little keepsake I received years ago as a high school graduation gift – Jeremiah 29:11 quoted on a sailboat.

This year’s graduates (and all young adults) are sailing into a future which suddenly became uncertain and unsettling 2-3 months ago. The job market went from boom to bust, and in about every sector of society, people’s plans are changing rapidly in this pandemic-altered world.

What does God’s Word have to say to give us hope in the face of a challenging future? The promise of Jeremiah 29:11 certainly encourages us, but it has a different message than we might think.

Jeremiah is known as the “weeping prophet.” He lived and ministered in the Old Testament’s darkest hour. He witnessed the superpower of the day, Babylon, conquer Jerusalem and Judah, just as the Lord had prophesied through Jeremiah.

At the time God inspired the prophet’s words, Judah’s brightest and best had already been taken as prisoners to Babylon. Jerusalem was still standing, but a few years later, it was besieged and totally destroyed by Babylon.

The future and hope of God’s people was being snuffed out before their eyes. And God’s Word through Jeremiah made it clear that this was more than a political takeover. Babylon was an agent of God’s justice and punishment against His unfaithful people.

Jeremiah chapter 29 is a letter from God to His people who have already been taken as exiles from their homeland to Babylon, hundreds of miles to the east. God encourages the exiles to begin building a new life: have families, build houses, plant gardens, and work for the good of this pagan city which would be their home for the rest of their lives.

The exile lasted for 70 years. Anyone who returned from Babylon to Jerusalem would have been little when they left and gray-haired when they returned. But those who made it back to Jerusalem found a pile of rubble. The life their ancestors had known in the Promised Land was gone.

Where is the hope in this episode of history? Where is the good future? This exile was a major “reset” for Israel. The older generations, who had led the nation astray and worshipped man-made idols, were either wiped out in the conquest or died in exile. It would be up to the younger Israelites to begin again on a faithful foundation.

God’s future plans for His people begin with repenting, returning to Him, and trusting Him alone. Call on the true God once again, pray to Him and seek Him – that was God’s message 2,600 years ago, and for us today.

We don’t know (and we don’t really need to know) what God has planned for every step of our lives – where we will live and work, whom we will meet and marry, etc.

Above all, we need to know and trust the Lord Himself. Without Him, we don’t have hope and we don’t have a future. But in Him, we have everything we need!

Where we will go to school and what we will do with our lives are important, to be sure. But even more important is whether we will trust the Lord for today, our future, and our eternity.

Whether you are a new grad, or long past your school days, your hope is the Lord Himself. Through His Son, He has prepared a future for you which outshines the best that this world can offer!

I pray that all your days, you will know this hope in Christ Jesus. May this hope permeate your life, wherever you go and whatever you do, because the future – in Christ – is bright.